Of countries whose visiting orchestras I was expecting to hear in the near future, Kazakhstan did not rank particularly high on the list. Yet there I was in Berkeley's Zellerbach Hall on Tuesday, watching them: a large group (as student orchestras often are) of young people, many of them women, proving that there is more than enough talent in the Kazakh conservatory to make a professional-quality symphony orchestra.

What does an orchestra from Kazakhstan play? Composers from Kazakhstan are a little thin on the ground, but they had one with them to take the bow after her work, a 45-year-old woman named Aktoty Raimkulova, who teaches at the conservatory. Her 20-minute symphonic poem Jamilya is mostly a cheerful, fast, rhythmically complex dance, somewhat like the more earthy bits of a Khachaturian ballet if less catchy, with one slow section in the middle and several pauses for some input from a 5-person Kazakh folk ensemble seated in front. 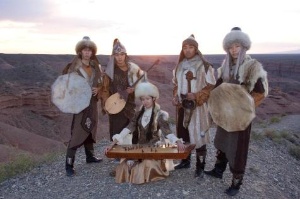 The folk group, who'd played a couple pieces of their own as introduction, is named Turan and also consists of conservatory students. While the orchestra dressed inconspicuously in black shirts and slacks, the folk musicians wore traditional Kazakh clothing, which was really something. These helmets they had on ... well, you could easily imagine these kids on horseback, galloping across the steppe on their way to conquer the Ukraine or something. Here's a small photo in their outfits, but with fur hats instead of helmets. They played a variety of instruments, including the local mandolin (dombra), the local dulcimer (jetigen), the local jews harp, a few types of drums, and a bowed horsehair-string instrument called the kyl kobyz that emitted several different sounds, the most common closely resembling a musically-gifted cow in pain.

The orchestra had its moments too, including a wonderfully twisted solo for clarinet with glissandi cutting through all the notes that don't exist on the standard Western scale. At the very end, an orchestra musician walked out carrying a huge straight trumpet, about 7 feet long and painted purple, which made a sound like a goat in pain. (Of course, I listen to the shofar, so I shouldn't talk.)

Aside from that local offering, the repertoire was mostly influenced by the Russian hegemony. French conductor Christophe Mangou, who works with the orchestra regularly, led both Jamilya and the big piece on the program, Rachmaninoff's Second Piano Concerto. Soloist on this was Jania Aubakirova, another middle-aged woman who, from her bio in the program book, is Kazakhstan's leading pianistic pedagogue. She played the concerto in a heavy gliding manner, firm-footed but not stodgy. The orchestra in familiar repertoire had some of that hollow echoing style familiar from Russian orchestras, more in the brass and winds than in the strings.

A student conductor, a slightly gawky glasses-wearing young man named Kanat Omarov, led another Russian staple, Tchaikovsky's Romeo and Juliet, very slow and deeply ominous, and a chipper treat in honor of the host country, Bernstein's Candide Overture. It was really interesting, and not at all objectionable, to hear this piece in a Kazakh accent. Timbres and phrasing style were very different from typical American performances; I wonder if the students had ever heard the piece before they began to study it.

The concert was not heavily publicized, and attendance was rather sparse. At least half of the audience looked as if they were Kazakhs themselves. This is not unusual for a foreign visit. When Gustavo Dudamel brought his Venezuelan students to Davies, the local Venezuelan expatriate community turned out in force, literally waving the flag. I guess there aren't as many Kazakhs around here as there are Venezuelans, and they didn't bring flags. But they, and the rest of us, appreciated the performance.

In case any east-coast readers are intrigued or want to cheer the Kazakhs on for their first American visit, the orchestra is taking its tour there this week, with the same program as far as I can tell. They'll be at Kennedy Center in D.C. on Friday evening, up at MIT on Sunday afternoon, and at Carnegie Hall (practice will get you there!) on Monday evening.