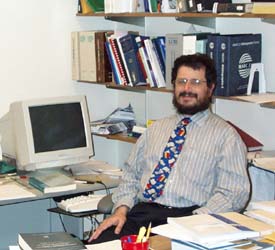 Bratman, David (Stephen). Born in Chicago, son of Nancy (editor) and Robert (physician); eldest of four sons. (Click here for brothers Benjamin and Joel.)  Raised in Cleveland, Ohio, and Silicon Valley (before it was called that), California.  B.A., University of California-Berkeley.  M.L.S., University of Washington. Married to Berni Phillips. Two cats, no kids.

I am co-editor of the journal Tolkien Studies: An Annual Scholarly Review, and a member of

for which I have been editor of the magazine Mythprint, awards administrator, member of the board of directors, and chair of the annual conference.

Here are some things I have written or compiled: My brief appearance in The New York Times gives my short answer to the question, "So what did you think of Peter Jackson's films of The Lord of the Rings?":

"I felt as if I were seeing two films at once," said David S. Bratman, a librarian at the Stanford University Law School. "One in the visuals, which was faithful and true to Tolkien, and another in the script and in the general tone and style, which was so unfaithful as to be a travesty."

From a library journal:

The new breed of digital illiterati exhibit a complete misunderstanding or indifference to the distinction between subscription and free online information as well as a chilling aversion to reading books. These "scholars" waste untold hours fruitlessly but insistently looking through thousands of Alta Vista search results, vainly hoping against hope that somehow all the right answers will tumble forth.

The research for a typical undergrad paper nowadays seems to consist of two hours of fruitless WWW browsing followed by a reluctant visit to the library. During this visit, one poorly formatted query is submitted to a full-text periodical database, the first five full-text articles on the results list of 800 hits are downloaded, and then it's Miller time.

While we may deplore such practices, or smirk at them, the dangerous reality is that a new class of information consumer has arisen ...  The inforamus is someone doing bad searches with an inadequate search engine in a morass of disorganized, incomplete, and sometimes inaccurate information, and who is perfectly happy with the results. If, as the library literature suggests, trained reference librarians answer questions correctly only half the time, how do you think the inforamus is doing?

Berni says a web site isn't complete without a picture of your cats.